I believe that we have the knowledge to power a better vehicle. It has been suppressed and buried and we have been brain washed to believe he manipulators. 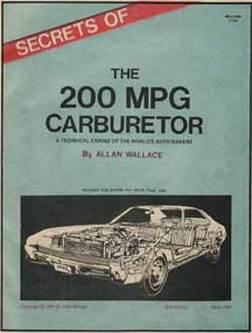 For years I’ve been hearing about fantastic carburetors that can give your car up to 200 mpg. But supposedly the automakers and Big Oil won’t allow them to come to market because they’d wreck the industry. The people who tell you this are usually conspiracy buffs who offer it as an example of how the masses are duped by the Illuminati, so you have to be skeptical. But still I wonder: is the 200-mpg carburetor a complete fantasy, or does something like it actually exist? Do you have one on your car? Would you like one?

Here’s the free PDF for 200MPG Carburetor Conversion hosted by Apparently Apparel and written by Allan Wallace, just for you! (http://www.apparentlyapparel.com/uploads/5/3/5/6/5356442/200mpg-carb.pdf)

NOTE: This is a big (57975kb) file so please be patient and allow up to 10 minutes download time depending on your connection speed.

Anyways, while that downloads, read what we found out about improved carburetors and automobiles that prompted the writing of this article.

1933 thru 1936 – Charles Nelson Pogue is issued several patents on his vaporizer type carburetors, and “claims of 200 miles per gallon” crop up all over the world. He never gets production off the ground and his carburetor fades away – But Mr. Pogue and his carburetor have been a legend in the field of fuel efficiency ever since.

More than 50 years ago – George Arlington Moore was issued more patents on fuel efficiency systems than any man in history to date.

The late 50’s and early 60’s – The Kendig and Fish variable venturi carburetors have some very interesting mileage figures. The Fish even gets into production on a very small scale – but for reasons unknown, both of these carburetors fade away over the next few years.

1968 – Ford Motor Company begins experiments with an engine that has a different kind of combustion chamber. A fuel injected version of 430 cid is tested and runs very well on an Air/Fuel mixture of 26:1 – Ford experimented with this engine for possible production by 1985 – Obviously it was never put into production.1973 – The annual Shell Oil Company employees contest turns out a world record for high mileage at Wood River, Illinois. A highly modified Opel of 1959 vintage sets the record with 376.59 miles per gallon – World record mileage is now well over 2,000 miles per gallon from very specialized vehicles designed to do one thing – get the most mileage possible.

1974 – An article from “Mechanix Illustrated”, about Humidifier Type Fuel Systems, tells of a man by the name of LaPan – who claims to get from “60 to 100 miles per gallon” with his system.

1976 – A modified Ford Pinto equipped with a turbocharged Nissan diesel engine is tested and gets up to 80 miles per gallon.

1977 – Tom Ogle, of El Paso, Texas, claims to get 100 miles per gallon on his 1970 Ford Galaxie with V-8 engine, weighing 4600 lb. Running one round trip test from El Paso, Texas to Demming, New Mexico and back used only two gallons of gas. His Vapor Fuel System eliminates the standard carburetor, only has a three gallon tank, and emits no carbon dioxide or unburned hydrocarbons.

1977 – A standard VW Rabbit diesel with turbocharger, is independently tested and gets up to 55 miles per gallon.

1978 – The Flex Gas Vaporizer -(as advertised in national magazines)- and sells for a reasonable price, claims to double gas mileage from most any car – and gets to 110 MPG on some… The FLEX GAS VAPORIZER developed by ONMEWTRONICS of Carson City, NV was being distributed by: Van M. Polowchak – 111 Pine – Fort Morgan, CO 80701 – Recent inquiries have gone unanswered.

1979 – Ralph Moody Jr., of Oak Hill, Florida, gets 84 miles per gallon from his modified Ford Capri, which has been equipped with a turbocharged 4-cyl Perkins diesel engine.

Are all these stories true..? You bet they are, and these are just a few of the thousands we haven’t even mentioned yet!- There are many many more.

The phantom carburetor of Charles Pogue has disappeared from the public eye, and re-appeared many times over the past 60 years or so. Every few years some rumors and stories begin to circulate about someone trying to manufacture and market the carburetor, but for some unknown reason the stories die out and the carburetor never makes it to market.

Many people have built the Pogue and some have been very successful. A letter from Mr. Gail Dye of Benton, IL – claims that he has been offered a $100,000 a year job to quit playing around with these things. We haven’t heard from him since – Maybe he took the job.?

Another letter from a Bill Stewart Wood of Nestor, CA says that he and a partner built a Pogue Carburetor about 25 years ago – but after having some problems with it, and no money to continue working on it, shelved the project and never got back to it. A man in Richardson, TX was selling plans to a carburetor modeled after the Pogue but used in conjunction with the standard carburetor for starting and cold running. An automatic thermostat switches over to the Pogue type carburetor when temperature is hot enough to vaporize the fuel. Upper chamber is 5 inches high and 7 inches diameter, lower chamber is 2 inches deep and 4 inches diameter. He claims to have installed the device on a Lincoln and has obtained up to 100 miles per gallon. He was doing business as: FUELMIZER – Box 6025 – Richardson, TX 75080 – Recent inquiries go unanswered…

John Wesling – Preston, MN worked on his idea to use both heat and vacuum, with a device made up of modified carburetor parts and a heat exchanger to double his mileage in 1981.

Joe Lasante – Bossano, Alberta, Canada was working on a system he said works quite well and is simple to make. He says he can get at least 30 MPG on his 1978 Dodge pickup with a 360 cid V-8 engine. The engine runs Very smooth and it has more power than it did without the modification.

Ken MacNeill, Box 9478, Winter Haven, FL says he can effectively double the mileage of Most Any Car.

Richard Goranflo, 109 Longleaf Lane, Altamont Springs, FL once gave seminars on the subject of high mileage – And claims to get from 45 MPG to 65 MPG on his 1976 Cadillac with 425 cid V-8 engine.

Bernard Wherry, Box 148, St Marys, WV – worked on his high mileage carburetor design for many years. He eventually ended up with three prototypes. With one giving him 60 MPG on a Chrysler with V-8 engine. He wanted to market the carburetors, but without the necessary financing he was unable to do so. He had turned over the designs to a firm who “claimed” they would market one of the three designs, but to date the Wherry carburetors are not on the market.

John Draper of Crofton, MD – Once fed all the info available on the characteristics of gasoline into a computer, and then fed in all the info he could get on the Pogue Carburetor – And asked if the Pogue would work. The computer said it would indeed.

Ray Covey of El Paso, TX – worked on a high mileage carburetor modeled after a Sgrignoli design for over a year, and ended up getting 65 MPG on his Chrysler V-8 with an occasional 100 MPG. After applying for a patent, Covey began marketing plans to his device and installed several units for a few of his customers. Covey built another design similar to a Ford Motor Company patent and started marketing plans to the new design too. Covey seems to be able to take ideas from others and make them work very well – To our knowledge, he has no original ideas of his own in the field of high mileage carburetion, but he seems to does do very well with the ideas of others. Richard Paul, Janesville, WI – Averages 80 MPG on his Oldsmobile Toronado, and says he has achieved as high as “149 MPG” on more than one occasion. He says he expects to top 180 MPG with the newest design he is working on.

Herb Hansen – Elgin, IL – Built a vaporizing carburetion system for use with alcohol Fuel. Using 140 proof alcohol in a Ford Pinto he says he gets 70 to 75 MPG and the engine produces “more power” than it does on gasoline with a standard carburetor.

Fred Holste of Jarrettsville, MD – Claims to have topped 45 MPG with his design for a vapor carburetor. He says he will deny having done so if we print his name though.

John G Mesal of Wrightwood, CA – Built his own version of the Pogue carburetor and obtained excellent results for both engine power and smoothness… But was unsuccessful at increasing mileage.

Jim Fouler. formerly of Cortez, CO – Built one prototype of his own design. He too was unsuccessful in gaining a mileage increase, but he continues to work at it.

Ivan Pinivta of St Norbert, Alberta, Canada – Once claimed to own an original Pogue Carburetor, and even had it up for sale. We offered him $5,000 for it – if it was the real thing – he refused our offer. He eventually took it to a Canadian News Agency where tests were made and an article written about it. The device is in reality a “Winnipeg Carburetor” – one of 200 built – and Not a genuine Pogue Carburetor at all – Mileage was about 35 to 45 miles per gallon.

So, as always, what do you think? With the following video, it seems like even the police are using alternative engines in these trying times. Personally, I think it’s time to upgrade to anti-grav already, get rid of roads altogether and make gardens and farms instead. Plant some hemp to regenerate (instead of deplete) the soil, rid the air and land of radiation, and help promote peace on this planet, instead of the current status quo. Leave your thoughts below, and have a great day.

Please donate to keep this site going. I use PayPal so no information is collected or saved on this or any other site. Many thanks, Earl